Bangkok on alert after deadly floods hit a third of Thailand – Outney.net

Thailand is rushing to defend its capital Bangkok after floods hit the country’s northern and central provinces, killing six people.

Soldiers on Tuesday erected barriers and sandbags to protect archeological ruins and monuments, as well as neighborhoods in the old royal capital Ayutthaya, about 60 km (37 miles) north of Bangkok.

“We will give people a warning if there is a sign that the water level is rising and if there is a risk of flooding,” said Bangkok Governor Aswin Kwanmuang.

The level of the Chao Phraya River, which meanders in Bangkok after traversing almost 400 km (248 miles) north, is rising steadily amid Tropical Storm Dianmu, which has hit 30 of the country’s 76 provinces.

Seasonal rainfall could exacerbate flooding, which extends to about a third of Thailand, officials said. Pumping stations were being used to reduce potential damage.

About 70,000 homes are estimated to be affected in the central region of the kingdom, said the Thai Department for Disaster Prevention and Mitigation.

Over the weekend, emergency crews organized dramatic rescues by evacuating villagers in a part of Chaiyaphum province.

Bangkok witnessed a catastrophic monsoon season 2011 when it experienced its worst floods in decades. One-fifth of the city was under water and more than 500 people died.

In the past, agricultural lands and rice pastures in low-lying areas absorbed water from floods, but the city’s expansion has seen much converted to real estate. 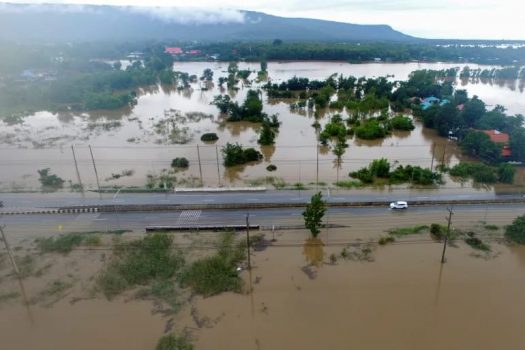 Six private islands that cost less than an apartment in Europe - Outney.net

Erdogan official meeting in Russia, here are the topics that are expected to be discussed with President Putin - Outney.net