Get ready to kick Turkey out of the Alliance – Outney.net – News24

Two senior American officials have signed a letter published in the Financial Times, in which they denounce Turkish ‘bargaining’ for the membership of Sweden and Finland in NATO.

They also call on the Alliance to prepare to expel Turkey.

The letter published in the FT and signed by former US ambassador to the UN Mark Wallace and Madeleine Joelson, two senior officials at the Turkey Democracy Program, refers among other things to Turkey’s “Grand Bargain” in relation to the admission of Sweden and Finland to NATO and criticizes the strategy of the allies, who according to them compromised with the demands of Recep Tayyip Erdogan, to remove his veto, write the Greek media. 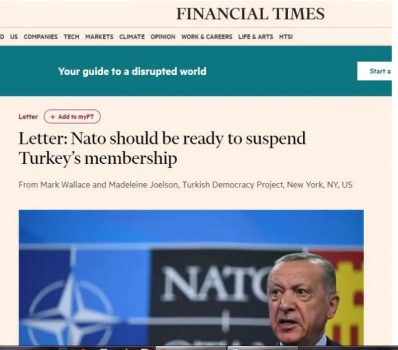 “The problem with this strategy is that it rewards Erdoğan’s bad behavior. This will encourage him to push for more demands when NATO needs a unanimous vote in times of crisis. Any concession from the Alliance will be seen as a diplomatic victory by Erdogan, helping him secure domestic support and aid his re-election bid next year. NATO members already know that while Turkey belongs to NATO, Erdogan does not. They must be prepared to work towards this goal. If NATO’s rules were amended to allow for the temporary suspension of member states until their leaders reunited with the Alliance’s values ​​and interests, then Erdogan would understand the prospect of real economic and strategic consequences for his actions,” they point out. officials”, write foreign media.

In the fight against the fires, the Portuguese authorities announce a state of emergency, 29 people are reported injured - Outney.net - News24