While the race for the new leader of the conservatives and at the same time the new prime minister of Britain is at its hottest point, a scandal has been revealed regarding the candidate Rishi Sunak.

His campaign seems to be orchestrated down to the last detail, as a ready-made message was sent to the people who support his candidacy, asking them to fill in their name, place of residence and the reason why they supported Mr. Sunak.

The message also included several alternatives regarding the reason for the support, which included the fact that Altar he is the only one who can rebuild the economy, has a plan to beat inflation and defeat Labor in the election.

“My name is… and I’m from… The reason why I support Rishi Sunak is because …(write a reason), or 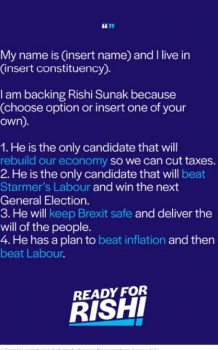 The team of his opponent, Liz Truss, has been harsh with the former minister’s campaign, as they have called everything fabricated, planned and inauthentic.

Meanwhile, Sunak’s supporters claim that the same thing is being done by Truss’s supporters.
“I saw 12 supporters of Mrs Truss all sending the same message of support. Keep your hypocrisy to yourself”, he said.

High-profile fighter, member of the band “Beatles of ISIS” is sentenced to life imprisonment in the USA – Outney.net – News24

NAME/ Cocaine hidden under the bed, three young Albanians are arrested in Italy, one boy and two girls - Outney.net - News24

The attack on the atomic plant, the clashes between Russia and Ukraine continue - Outney.net - News24